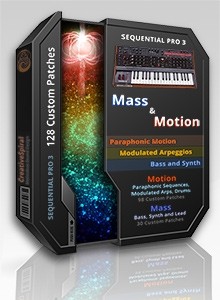 This is a Digital Download.  This Sound Set includes 128 patches that can be loaded to your Sequential Pro 3 synthesizer.

I've spent many months dialing in these motion patches.   My goal was to create nuanced patches that show off the motion/animated sound capabilities of the Pro 3, but not have them be "one trick ponies" that you wouldn't really ever use in a personal songwriting scenario.   In my opinion, far to often, motion patches are just sequences that play out a specific melodic pattern.   I have desinged these patches to be played up and down the keybed, in any key.

There are dozens of Paraphonic Motion patches, which can be played up to three keys at a time for harmonic playing, with a variety of LFO and sequence based motion affecting each of the paraphonic notes.

There are dozens of Paraphonic Arpeggio patches that utilize the Arp in paraphonic mode where it cycles through the three oscillators for each consecutive note in the arp (Like classic Korg Monopoly behavior).   These patches can be played up and down the keybed in any key, and include a variety of modulations and gated or trigger sequences that allow for very interesting melodic content.   I have curated many melodic stepping patterns which usually use Octave, P5, or P4 stepping up or down to alter the Arp sequence dynamically, while still maintaining highly harmonic / in-key melodic content while you play.   The result is Complex Arpeggio sequences which have a sort of procedural progression which varies depending on how many keys are held down at a given time, and the length of the sequences.   ie:  Not just your standard repeating arp...  these patches have a ton of nuance and character to them.

These are a handful of classic monophonic arp patches, but many of them include complex/nuances sequencing like described above for paraphonic arps.

In addition to the Motion Patches, which make up the majority of this soundset, there are many core tone patches as well.   My first soundset for the Pro 3 was focused on fundamental tones that are usable in songwriting.  These ~30 Mass patches are an extension of those type of sounds - patches that I've created since the first soundset that I've found very useful.    The majority are core bass tones - a variety ranging from smooth sub bass to dynamic electric basses to meaty rumbling synth bass tones.   There are also a couple famous song tones.

Requires Sequential Pro 3 Synthesizer
This soundset works wtih the Pro 3 synth.   I highly recommend this synthesizer to everyone.   It really is the most versatile and powerful Monosynth/Parasynth ever created.   It sounds amazing, and it scores a 10/10 on fun factor... truly a pleasure to play this instrument.   When I first got it, I intended to use it primarily for bass and lead tones.   It definitely excels in those areas, but it does so much more with the gigantic mod matrix, the 4x16x16 sequencer, and the unique paraphonic mode capabilities.   It can truly fill in the "harmony section" of a song with its paraphonic mode.

Sound Design Process, Modulation
I've spent the past six months working on these patches - it has been my primary music project, and I've put hundreds of hours into designing these patches and playing them.   I've gone over each patch with multiple passes of fine tuning to get them sounding good up and down the keybed, and with lots of nuances.

MODULATION:  Nearly all patches have lots of thoughtful modulation on tap via both the Mod Wheel and Slider, so definitely experiment with adjusting those as you explore them and play them.

In addition, I have programmed in aftertouch/pressure modulation on nearly all patches, so don't be afraid to dig into the keys to check for additional nuances and variation.   For many patches, the performance modulation controls complex macro type behaviors, targeting a multitude of parameters.   The 32 mod slots on the Pro 3 are amazing for complex macro type behaviors.

As with all my sound sets, all patches are named with standardized 3-5 character prefixes that define the sound type.  (ie:  BAS, LED, STR, BRS, SYN, ARP, etc..)  As mentioned above there are many patches that start with P-XXX which indicates they can be played Paraphonically, up to three notes at a time.  And two different type of Arpeggio patches:  Standard Arps have ARP prefix, and paraphonic arps have ARP-P prefix, meaning they will play like classic Korg Monopoly arp patches.

Similar sounds are grouped together sequentially in the sound bank, so you can audition similar sounds, and quickly jump between sound categories to find what you're looking for, by the general type of patch.

There is a total of ~90 Motion Patches, and ~30 Mass Patches in this soundset, and a handful of other sound designs I've been experimenting with, including some drum sequencing patches. The patch prefixes indicate their intended primary usage, however, most of the basses can double as lead tones.  I've done my best to optimize patches to sound great up and down the keybed.


Files Included, User Bank Destination:
There are four copies of the sound bank included in this download. They are an exact copy of each other, except for the User Bank number that they were saved from. They will load into User Bank 1, 2, 3 or 4 by default, according to the file name indication (U1, U2, U3, U4). This is the bank that the sound set will load to by default, if you're directly sending it by general purpose Sysex program like MIDI-OX (PC) or Sysex Librarian (MAC).  If you use an editor program like Soundtower, you can send any of the files to any bank.  The fifth file included has info about the patches, installation info, and license info.

Digital Download, License Terms
This licensed product is a digital download and is offered as a license to use.  You will receive a .sysex soundbank file (actually four versions - one each that will load to User Bank 1, 2, 3, or 4 by default.   These files are only for use with the Sequential Pro 3 Keyboard.   Once purchased, there are no refunds or exchanges available.   You agree to not copy, redistribute, transfer or resell any of the patches in this product.  The patches are copyrighted and licensed for your use only.   You may use them in all your productions, including professional or commercial projects.  If you have questions, email me at [email protected] 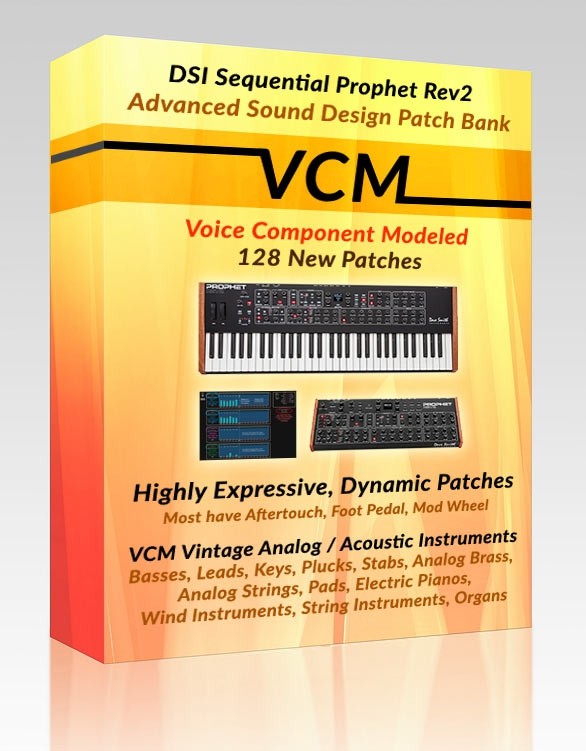 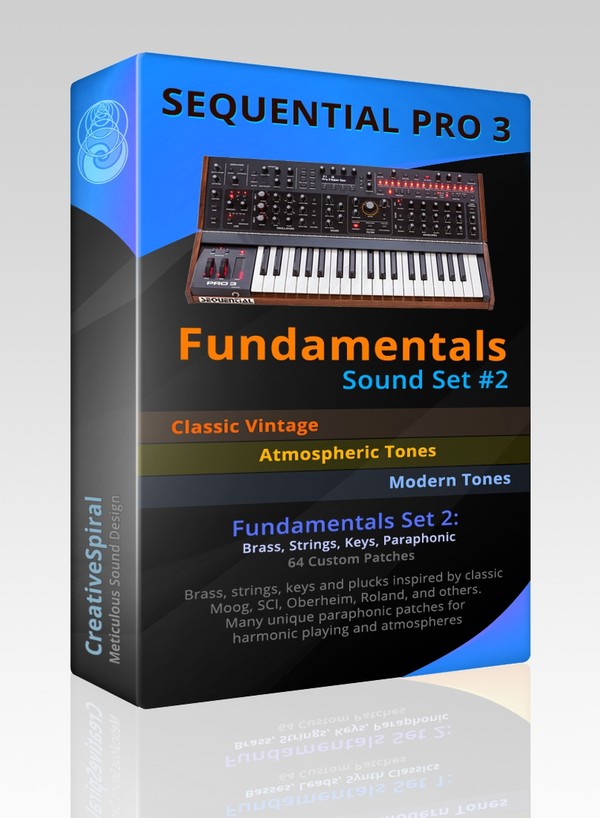 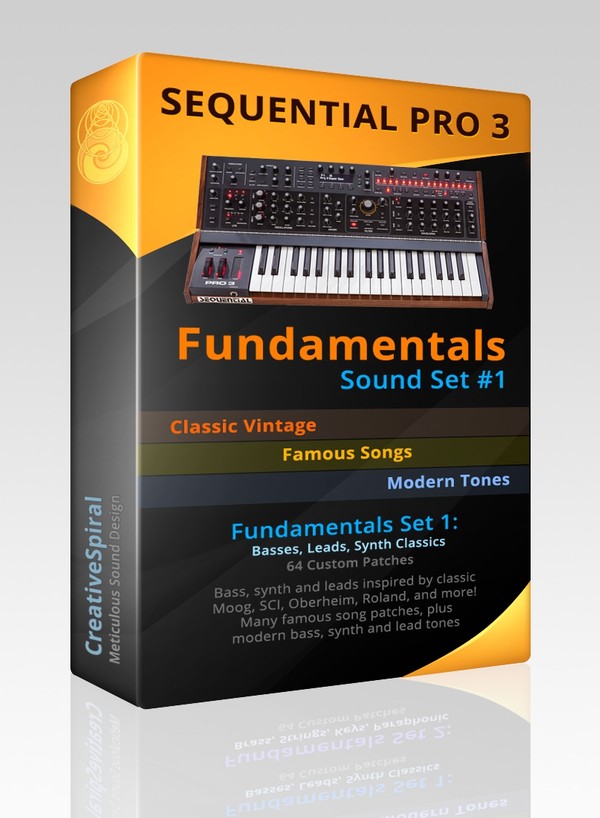 Sequential Pro 3 Fundamentals - Sound Set 1
$20
Add to cart
This website uses cookies so that we can provide you with the best user experience. By continuing to use this website you are giving consent to cookies being used.
Got it