Songs for the Songs of Birds (Don McKay)

The work of much-loved Canadian poet Don McKay, Songs for the Songs of Birds celebrates the way birds "articulate the air" and considers what the world would be without them. Many of the poems have appeared in printed collections of poetry, notably Camber (McClelland & Stewart, 2004) and Strike / Slip (McClelland & Stewart, 2006). A few make their first appearance in this audio collection.

”These exuberantly musical and shrewd poems are ecological in the fullest sense of the word: they seek to elucidate our relationships with our fragile dwelling places both on the earth and in our own skins.”
— The New York Times Book Review

"If you're a poetry-loving bird-watcher, this is for you."
— AudioFile magazine

”This CD would be entirely worthwhile if the goal was merely to collect all of the poems about birds Don McKay has written over the years. What is lovely about the CD is that it does collect McKay’s bird poems in one place and allows us to hear them read in the author’s own musical voice (think Dylan Thomas without the accent and all the booze); it is also augmented with the actual songs of birds recorded in situ by Dave Fifield. . . . Some of the most valuable bonus features are the comments McKay makes between poems. “We love [birds],” he sys, “because they are intimate with the air . . . Birds make us sense how crucial [air] is; they articulate the very atmosphere around us.” The attention these poems pay to birds is also attention to the world and in that way, the Songs for the Songs of Birds encourages our own attentiveness to all things. Put the CD on and “Let’s go. / For we shall be changed.”
— The Malahat Review

This Canadian poetry audiobook brought to you by Rattling Books of Newfoundland and Labrador.
You'll get 1 file (68.2MB) 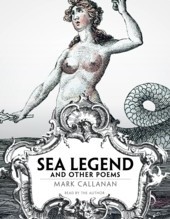 Sea Legend and Other Poems (Mark Callanan)
$4.95
Buy now
This website uses cookies so that we can provide you with the best user experience. By continuing to use this website you are giving consent to cookies being used.
Got it