Eckhart, the hero of our story, is a tiny young mouse. He and his family have just moved inside for the winter. It's dark and cold in the walls of their farmhouse. But all of a sudden every year in late December their tummies are filled by a mysterious abundance of delicious crumbs. The mice celebrate with feasting and call it Crumbfest. No one knows why it happens until Eckhart solves the mystery.

In 2001 a five year old Antonia Francis performed Crumbfest for her Mom's community radio show Christmas special. The irrepressible energy and charm of Antonia's narration made it a perennial Christmas favourite. This is the original radio broadcast, recording flaws and all. The roughness of the recording sets off brilliantly the perfection of Antonia's performance.

Here is The True Meaning of Crumbfest, told as only a five year old Antonia Francis could tell it. An underground classic of childrens christmas literature and a perennial favourite among kids christmas audio books.

Are you ready for a special treat? Not only is this a quaint tale of the joy that is Christmas, it also offers a remarkable narration. Ignoring his grandfather's advice to let well enough alone, Eckhart, a new mouse born in the summer, is on a quest to find out more about the special winter day when delectable crumbs abound in the house. The story's narrator is 5-year-old Antonia Francis, who recorded it for her mother's radio program. How refreshing her narration is! Miss Francis's enthusiasm abounds as she elongates words and hesitantly approaches "big" words in the tale. Her voice rises and falls with exaggerated suspense and wonder. The combination of Francis's heartfelt empathy for Eckhart and her youthful, earnest presentation captivates.
A.R. Winner of AudioFile Earphones Award

From the Ottawa Citizen:

.... One of the most engaging such recordings is the work of a small company in Tors Cove, N.L., a short drive out of St. John's. Rattling Books produces a variety of engagingly unusual Canadian titles, many of them with a Newfoundland-Labrador connection, in unabridged audio format. (And unapologetically, too. Says founder Janet Russell to anyone who thinks audiobooks "are some form of cheating: If you want to be like that about it, writing it down in the first place was cheating. What's wrong with you, can't tell a story or what? In the beginning was the Word, and the Word was Spoken.") One of the most engagingly unusual of its titles is a kids' audiobook with a festive-season theme. And it has recently been honoured with an Earphones Award from the U.S. magazine AudioFile.

The True Meaning of Crumbfest (22 minutes unabridged/1 CD, $9.95) Written by Prince Edward Island history professor and storyteller David Weale, this story has become very popular since it first appeared in print seven years ago. It is the adventure of a small mouse who tries to discover why something wonderful happens once a year, after the extended mouse family moves from their beloved Outside to the between-walls darkness of the Inside. Sweet and delightfully tart at the same time, and perfect for kids four to nine, the story is narrated by Antonia Francis. And that's one of the surprising appeals of the recording. At the time the story was recorded -- in 2001, for her mother's community radio show -- Antonia was only five years old. Young Antonia turns her little voice to a genuinely impressive range. She is as cheery, apprehensive, sad or triumphant as the narrative occasion demands, and she is eminently listenable. The 22-minute recording is the original radio presentation, rough around the edges, but still a joy.

AudioFile called Crumbfest a "special treat." And so it is.
Janice Kennedy

The True Meaning of Crumbfest by David Weale is another EarLit audio book title from Rattling Books, Newfoundland publisher of Canadian unabridged audiobooks (aka audio books).

A Canadian audiobook for all ages at Christmas.
You'll get 1 file (20.2MB)

If You're There short fiction single (Lisa Moore) 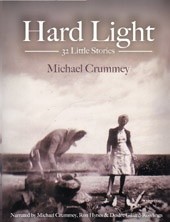