Named by AudioFile Magazine as one of the 12 Best Fiction Audio Books of the Year in 2007!

This collection of short stories by Mavis Gallant was selected by Russell Banks and printed in Canada by McClelland and Stewart Ltd. in 2004 under the title Montreal Stories and simultaneously in the United States by The New York Review of Books under the title Varieties of Exile.

Thirteen of these fifteen Mavis Gallant stories first appeared in The New Yorker. The exceptions are "1933" which originally appeared as "Déclassé" in Mademoiselle and "The Fenton Child".

Mavis Gallant is widely respected by writers the world over. Some hail Mavis Gallant as the greatest master of short fiction writing of our time.

To call the families in these 15 stories dysfunctional would be an understatement. Gallant's characters are misplaced even in location--not French, British, or American, they always seem uncomfortable in their surroundings. The tension can be heard in Margot Dionne's smooth narration, conveying frustration without the contrivance of stilted accents. Gallant (who has lived in Paris since 1951) deftly conveys innocence through the child's or grown child's perspective. The first story, "The Fenton Child," immediately grips listeners, and the rest of the book doesn't release its choke hold. Various stories focus on the same characters, but these aren't cyclical and at times contradict previous relationships (again, perhaps part of the total sense of displacement). Listening to Dionne's voice, you almost forget this isn't her own life she's describing. R.R. Winner of AudioFile Earphones Award

From the Ottawa Citizen

Montreal Stories by Gallant, the Montreal-born writer who has lived most of her life in Paris, is sheer perfection. The audiobook (Rattling Books, 11 hours unabridged collection/MP3 CD, $29.95) recently won an Earphones Award from the U.S. magazine AudioFile, and it is easy to understand why. Gallant's brilliant stories (of grim relationships and the Montreal of her 1930s and '40s youth) in the rich, modulated narration of actor Margot Dionne stay with you long after the recording has finished.

"One of our era's masters of the short story." Harpers "Gallant's subject is the comic opera of character...Before we know it she will have circled a person, captured a voice, revealed a whole manner of a life in the way a character avoids an issue or discusses a dress." Michael Ondaatje

"You can't go wrong with any Gallant collection-Overhead in a Balloon has some of her best European stories, Paris Notebooks has an unforgettable street-level account of May '68, the colossal Collected Stories is a one-stop argument for ranking her with Chekhov-but I'll give Montreal Stories the nod. Not only is it a little more user-friendly than Collected but it's the one place where all the Linnet Muir stories are gathered. This loosely autobiographical suite about the literal and symbolic emancipation of a girl growing up in the stifling provincial atmosphere before, during and after World War II. It's a world Gallant recalls in such detail, and evokes with such emotional exactitude through the eyes of one of the many underdogs to whom she has given voice, that the stories inadvertently cross the line between literature and social history. Read Montreal Stories and you'll get as complete a look into a lost world a you'll get from War and Peace; you'll also be left in no doubt as to why the Quiet Revolution had to happen. " Ian McGillis, Montreal Review of Books

Montreal Stories by Mavis Gallant is another EarLit audio book title from Rattling Books, Newfoundland publisher of Canadian unabridged audiobooks (aka audio books ) for the world. Listen, a way to read more.


This Canadian audiobook brought to you by Rattling Books of Newfoundland and Labrador.
You'll get 1 file (304.9MB) 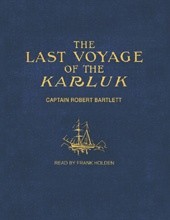 The Fat Years short fiction single (Carmelita McGrath)
$2.95
Buy now
This website uses cookies so that we can provide you with the best user experience. By continuing to use this website you are giving consent to cookies being used.
Got it