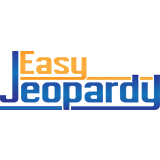 What am I purchasing?
You are purchasing the best PowerPoint Jeopardy template available on the Internet!

Is it easy to get started?
Yes! It's easy to edit, update, and get started. There are no complex macros or programming knowledge required with this template. With Premium you receive quite a bit!

You'll can get started with the 6x5 size template (6 topics, 5 questions each) or you might want to start planning your game using the planner spreadsheet. Either way, it's easy to get started!

How are the files saved?
Files are saved as PowerPoint templates (.potx) and will open up a new PowerPoint file (.pptx) each time, so you don't accidentally overwrite the original file. This means you can make an unlimited number of games!

Scored Jeopardy is saved as template with a different extension (.potm) because it contains VBA.

What kind of questions can I use?
With this template, you can use text, images, videos, audio...anything you'd like! If it can go into a PowerPoint, it can work with this game.

What device do I need to get started?
All you need is your computer. When you're ready to display to your audience or class, just hook it up to the room's projector or TV. That means this game also works with SMART boards. Open questions using your finger as the mouse.

Since PowerPoint can run on tablets and phones, you can now play and project from your mobile device (e.g. iPad).

6x5 Template
This is the traditional size of Jeopardy. 6 topics each, 5 "answers" down.

Quick Start PDF Guide
You don't have to be a PowerPoint guru to set up the game, but it'll be much easier to figure out once you've taken a look at this guick guide.

How to Play Video
For a more in-depth tutorial, you'll have access to a How to Play video. It's streamed from the website so you don't have to worry about having a large video file included in your download.

Scored Jeopardy
You can keep track of 6x5 Jeopardy right on the screen! This template uses VBA, so you'll need to give it permission for it to work. There's a video that shows you how it works also.

Final Jeopardy
All templates in Premium have Final Jeopardy built in. There's a video that will show you how it works. It's seamless! More importantly...the Jeopardy thinking music will play!

Planner and Host Card Template
With the included Excel template file, you'll be able to plan your games out in advance. This will make your life easier when it's time to start entering questions into the Jeopardy template.

The host card is automatically generated in a separate sheet for you to print. That way, you have the answers in front of you when it's game time.

Daily Double Video Tutorial
If you've watched Jeopardy, you'll know that the game has exciting Daily Doubles! You'll want to place them on more-difficult-than-usual questions and have the participant wager an amount before displaying the question. Also, you'll want the slide to look different and have the Daily Double sound play when the slide begins. There's a short video that will show you have to do all of that very quickly!

Customization Video Tutorial
You can make the game look any way you want! The only limit is your creativity. Make a theme, change colors, pick a font, add backgrounds, insert your logo...anything you want with just a little know-how. And remember, you don't need to be a PowerPoint expert since the video tutorials are included!
1 file (47.7MB) 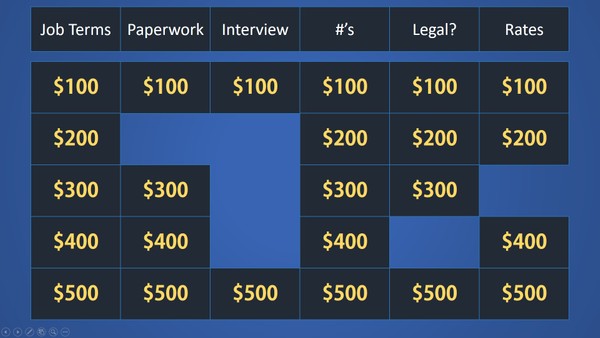 Easy Jeopardy PowerPoint Template (Basic)
$4.99
Buy now
This website uses cookies so that we can provide you with the best user experience. By continuing to use this website you are giving consent to cookies being used.
Got it