Founder of He-style Taijiquan was He Zhaoyuan, who was born in Zhaobao town, wen county in Henan province. As a disciple of Chen Qingping, on basis of keeping the soul of boxing from hes teacher, he made some changes of fist frame with creativity, so the later generations call it as He-style Taijiquan and there are also some people calling it as Zhaobao Taijiquan according to the original region.

In He-style Taijiquan five elements combine with fist trend, combine with human body, on the aspect of practicing method,it requires external five elements drive internal five elements, then reach to exterior by means of qi of internal five elements, He-style Taijiquan is all in one by means of qi of five elements, move qi with heart, command the whole body, trend follows the arrival of qi, qi arrives vigorously once shape come into being respiration and openness and closing are purely natural emptily lead the jacking force, sink the respired air to dantian. practice fist and guide trend softly and uniformly, relax and activate the tendons, in order to achieve the effect of fatigue within the limit eliminate essence derived from food by means of shaking circulation of blood is unobstructed get rid of diseases preserve health and prolong life.
He Style is one of the traditional styles of Taijiquan, and was first practised by He Zhaoyuan (1810-1890), a Taiji master from Zhaobao, Wenxian County, Henan; during the late Qing Dynasty.

He Zhaoyuan learned Taijiquan from Chen Qingping, the towns boxing coach. Later, he was appointed to the post of Wu Xinlan, in the capital. Under the influence of Li Tangjie, a master of natural science, He Zhaoyuan undertook to reform Taijiquan, and further developed its’ theory considerably. The theories of natural science, Confucianism, Taoism, and medical science were incorporated into the form and instruction of Taijiquan. He Style then included a smooth and continuous set of movements which perfectly connected the skills to the theory. He Style was then passed on to his sons Runzhi and Jingzhi, and also his grandson Qingxi.

He Qingxi was the third generation master of He Style. He trained a renowned group of students, including: He Xuexin; He Xuemin; Zhong Boying; Lu Shiying; Hao Yuchao; Chen Guilin; Chai Yuzhu, whose high skill level led them to become the driving force behind the spread of He Style. He Qingxi was an outstanding character, who both inherited the past, and ushered in the future.

He Xuexin (1890-1857), who inherited both the boxing and the medical skills handed down by his ancestors, became the main exponent of He Style. During the War of Resistance against Japan, he used his consummate medical and boxing skills to teach Taiji, and practice medicine in Baoji City (Shanxi Province). Just after the founding of the Peoples Republic of China, out of fondness for his home town, He Xuexin returned to Zhao Baozhen town with his family, where he continued to study Taiji and practice medicine. He passed his knowledge and skills to his sons; He Shiying and He Shijun.

Zheng Xijue (1906-1961) was born in Zhao Baozhen town. He gained recognition from He Qingxi, and was taken on as apprentice because of his diligence and respect for his teacher. During theWar of Resistance, Zheng moved to Xi’an (the capital of Shanxi Province), and was appointed as Martial Arts Teaching Officer in the Fourth Group of the National Revolutionary Army. For several decades in the martial arts circles of the Northwest, nobody could compete with him, and he was honoured as one of the ‘Two Heroes of He Style in the Northwest’.

Zheng Wuqing, an apprentice of He Qingxi, moved to Xi’an in 1938. He taught He Style in the 7th Branch of Huang Pu Military Academy, and shared the honour of being one of the ‘Two Heroes of He Style in the Northwest’. He contributed greatly to the spread of He Style , and had many notable apprentices, such as: Zheng Rui; Sun Lanting; Ji Changxiu; Liu Rui; Hou Erlian; Song Yunhua; Li Suicheng; Yuan Baoshan; and Zheng Jun.

He Shiying learned Chinese medicine and Taijiquan from his father, He Xinye, at an early age. He was faithful to the techniques he learned, not modifying them in any way. He Shiying was outstanding in internal medicine and acupuncture. In 1983, he began to collect and collate Taiji theory, proven Chinese Medicine recipes, and so contributed greatly to the inheritance of He Style Taijiquan. His main successors were his sons: Ding Yuan; Ding Qian; Ding Zhong (also Shaoping); Ding Guo (also Youlu); and his nephew Dong Yu. In 1983 he also passed He Style on to Dai Zhongming.

In recent years, He Style has commanded more and more attention from the relevant departments of Government. In 1993, the Research Association of He Style Taiji was founded by He Youlu, He Dingqian, He Xuejian, and Xia Chunlong, amongst others. Ji Changxiu founded the Hong Kong General Association of He Style Taichi, and was President of the latter. Through the above, He Style has been actively spread overseas.

At he First International Taiqiquan Health Conference, March 2001, He Youlu - the current representative figure in He Style – was invited to give a demonstration, which attracted great attention in the martial arts world. Also in 2001, He Youlu and He Dingqian wrote ‘The essential 18 postures of He Style Taichi’, which was reprinted in ‘Shaolin and Taiji’, and other martial arts publications, and so spread to an ever-increasing audience. ‘The He Style Taijiquan Manual’, written by He Youlu, was printed by the Peoples Sports Press, and was the first publication to demonstrate the character of He Style and make known certain theories and practices which had previously been kept within the He family. The manual was accessible to the average reader, and included authoritative historical information. In May 2003, a series of teaching VCDs – He Style Empty Hand forms, Sword, Pole, and Pushing Hands – by He Youlu were issued by the Peoples Sports Audiovisual Publishing House. In November 2003, He Youlu was invited by the Chinese Martial Arts Association to give a lecture on He Style Taijiquan, for the first time in China. 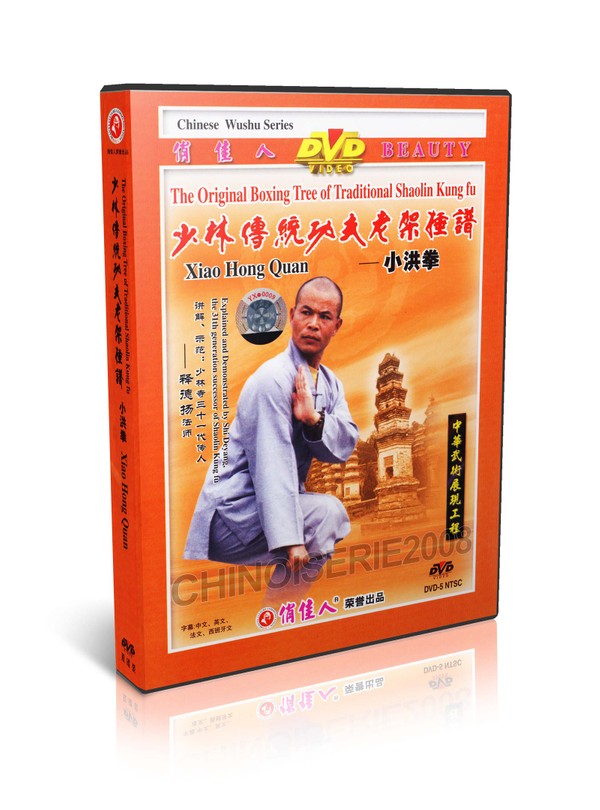 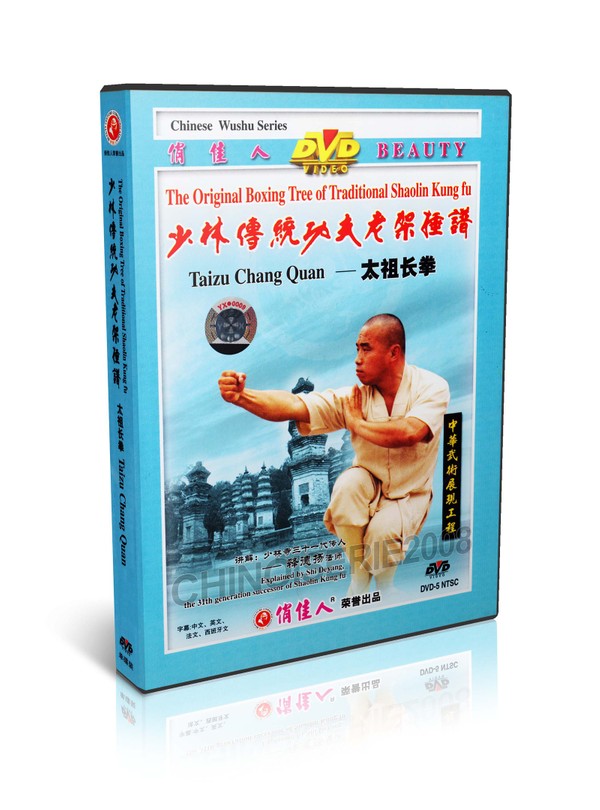 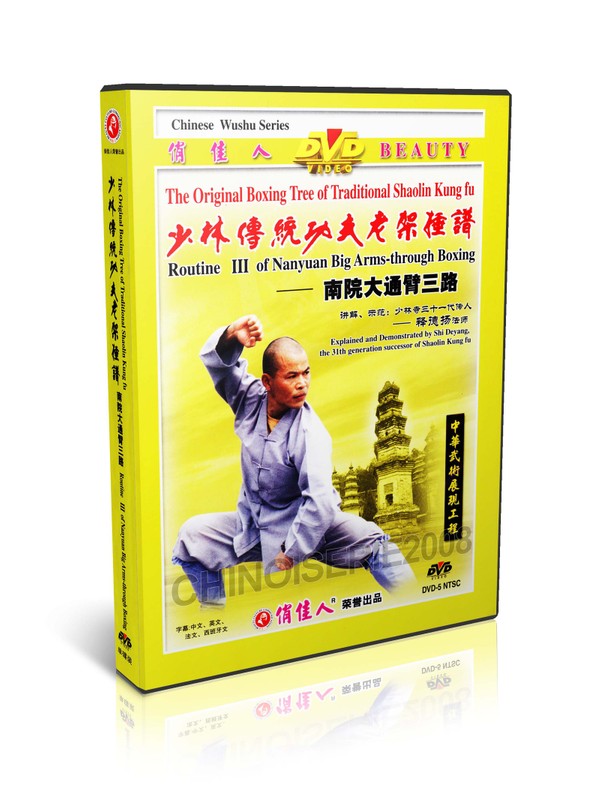 DW081-11 Traditional Shaolin Kungfu - ShaoLin Routine III Nanyuan Back through Boxing MP4
$9.99
$9.49
Add to cart
This website uses cookies so that we can provide you with the best user experience. By continuing to use this website you are giving consent to cookies being used.
Got it