Strange Rainbow play in imaginary worlds where the familiar dissolves into the unfamiliar.
This is a very deliberate meeting of traditions. Catriona plays a customised clarsach with sounds processed by Alistair MacDonald's laptop, along with soundscapes drawn from the environment.
As a duo they make music that seems at once dislocated and greatly concerned with roots and connections; a rendering of traditional musical language refracted through contemporary performance technique, and then again through the transformations of live electronics to explore new, unimagined colours.

at the back of the north wind

Scotland's most exciting and innovative traditional style harpist Catriona McKay was named Instrumentalist of the Year at the Traditional Music Awards in 2007. She has worked notably with Shetland Fiddler Chris Stout and with Olov Johansson who is a virtuoso player of the Swedish Nyckelharpa. However her most adventurous musical collaboration to date is with the Scottish electronic-music wizard Alistair MacDonald. The name of their current project as well as their duo is Strange Rainbow and they have just released a new CD which they call skimmerin'. Skimmerin' is a Scots word listed in Chambers's Scots Dictionary as having some eighteen different meanings. I take it that here, the sense is "shimmering or glittering".

There are three pieces on the CD described as "Three journeys starting in the woods and travelling to places real and imaginary". The sound sources in all three pieces are taken from recordings made on Saturday 20th June 2009 at 17.00 BST (they really are that specific) married to progressive harp playing techniques played by Catriona McKay. Any or all of these basic sound sources can be altered or enhanced by Alistair MacDonald's use of live electronics. The result is a series of multiple layered sound pictures, an adventuresome journey not just for the ears but for the imagination as well. The attractive packaging of the CD provides multiple pictures of the woods where the recordings were made to help stimulate the imagination of the listener.

The first piece entitled "seaward through quiet skies" sets the woodland background scene with sounds of birdsong and footsteps gently disturbing the forest litter and later the running water of a streamlet. Chimed notes from the harp suggest the spaciousness of the forest and the electronics in this piece are used to bring the harp sounds and the sounds of nature together in a sense mimicking one another. This atmospheric woodland journey eventually ends up at the seashore as the sounds of the brook are exchanged for waves breaking on the shoreline.

The second piece is called "at the back of the north wind". Once again, birdsong, footsteps and the snap of dry branches set the woodland background but in this piece the electronics are used to take us into stranger territory where the harp becomes more percussive and rhythmically adventurous. The birdsong is gradually transformed from the sounds of Scottish woods to something more tropical or even from some imaginary distant planet.

The most imaginative piece however is the third, "salted with fire". Where does Strange Rainbow transport us to now? Is this Prospero's Magic Island with Ariel and Caliban or even Lewis Carroll's Tulgey Wood where the Jabberwocky lurks? Certainly the avant-garde harp techniques played by Catriona McKay are electronically transformed into some fire-breathing dragon and later all the sound sources are used to produce a host of strange creature noises.

This is a CD which needs to be listened to more than once and with each hearing new things emerge; harmonies and even threads of melody not heard before emerge and provide new layers of sound colour to excite the listener. 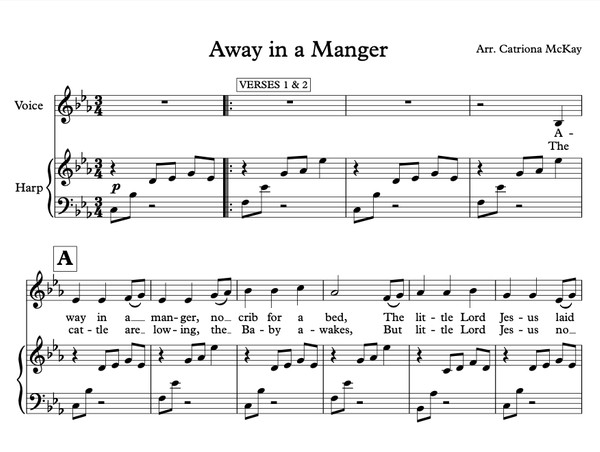 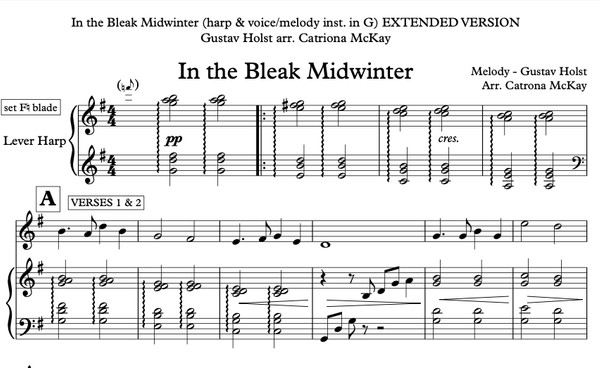 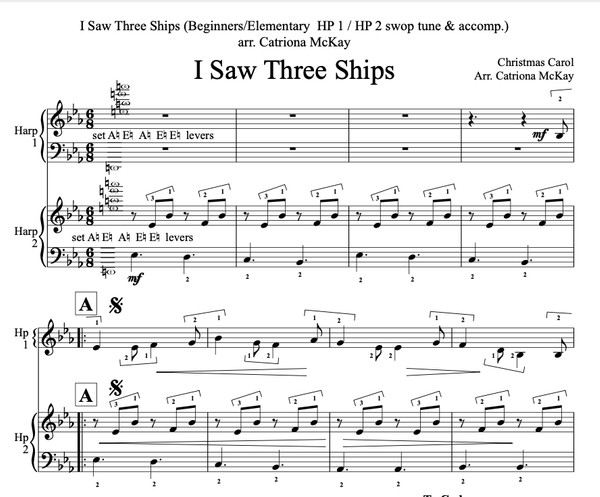 I Saw Three Ships, Beginner/Elementary Showstopper! arr. C McKay
£5
Add to cart
This website uses cookies so that we can provide you with the best user experience. By continuing to use this website you are giving consent to cookies being used.
Got it