Welcome to my magical world and celebration of solo harp!

The first 8 tracks complete the Love in Secret Suite for Solo Harp exploring old harp tunes reimagined in all sorts of ways. The final 3 tracks? Maybe you can dance around the garden or roam the forest of your imagination with a cuppa or a wee dram and think of those you love?

Embrace the moment when two harp traditions meet! Widely recognised for their individual harp talents, Olov is a nyckelharpa master who drives the Swedish harp boldly forward while Catriona, a Celtic harper like no other, is known for playing her Scottish harp to 'sound like an orchestra'. Olov's striking nychelharpa tunes are sculpted and textured by Catriona's creative arrangements and innovative rhythmic use of her harp. A few specially selected classic old Swedish tunes bursting with character and a splash of Scottish style compositions add a joy and warmth to their set. It's the meeting of two harps but most significantly, two fine musicians who give life to this unique world of music known as 'The Auld Harp'.

“a beguiling combination of timbres” The Scotsman ****

“This is the duo's second album, harp plus harp creates amazing new folkmusic. They create sounds that intertwine, sometimes gently , sometimes ferocious. A match made in heaven.”  LiRA Music Magazine

Background info - Catriona & Olov met in 2002 when Väsen and Fiddlers’ Bid shared a concert in Stockholm. A new sound was experienced that had to be explored further! In April 2009, they released their critically acclaimed first CD Foogy and since then they have appeared in, among other things : The International Harpfestival in Edinburgh, Ransäterstämman, Korrö Festival, Music Week in Östhammar, Music at Siljan, October Meeting in Uppsala, Celtic Connections in Glasgow, autumn 2012 tour USA.

The repertoire consists of both traditional and newly composed songs from Sweden and Scotland, performed in the unique new harp-shape of these two award-winning harpers. Catriona was named "Instrumentalist of the Year 2007 and 2014" at the Scots Trad Music Awards. Olov became "World Champion Nyckelharpa" at history's first NH-World Osterbybruk 1990.

1.  1st class to Glasgow (Olov Johansson)
Many thanks to the ticket inspector who just loved our playing and moved us to the 1st class coach on our late night journey back to Glasgow.

2.  Rain / Ekoln (Olov Johansson)
Rain was composed on a rainy day in Zurich. Ekoln is a Polska named after the big deep lake just next to where Olov lives.

Polska from Smaland in Sweden played by Gabriel Hook (1698-1769)
4.  The Dundee Law Set Da Shaalds O Foula (trad, Shetland), Catriona McKay of the Law Hill, Dundee (Chris Stout) 2 tunes taught to us by fiddler Chris Stout. The 2nd was written by him for Catriona's 21st birthday, a few years ago now.

Mr. Fish of Goskarlen, swimming in the lake Ekoln hasn't been caught by anyone so far.

6.  Stout's Trip / Olov's Polska (Catriona McKay)
Great friend and Shetland fiddler Chris Stout is a dynamic musical personality from Fair Isle. Chris took a solo trip round the world in 2008 and this tune was written to send him safely on his way. Catriona's first polska just had to be written for Olov!

7.  Astrids Vals (Olov Johansson)
Astrid, Olov's youngest daughter, loves to sing and dance and this is her waltz.

8.  The Harper's Dismissal (from the Angus Fraser Collection, based on a song melody by Roderick Morison, the Blind Harper who was Gaelic Scotland's last minstrel)
Catriona presented this old harp tune to Olov as a link to the ancient harp tradition of Scotland. This painfully beautiful tune stems from a time when the harp tradition was dying out in Scotland in the early 1700's.

9.  Early Sun Polska (Catriona McKay)
An early or a very late night.. both have their rewards! (and their challenges)

10.  Byss - Calle Vals (trad. Sweden)
A waltz played by one of the most famous Nyckelharpa players in Sweden. Byss-Cale (1783-1847) from Alvkarleby in Uppland.

11. In the Castle (Olov Johansson)
A Nyckelharpa reel that got it's shape and name from a trip to perform at Tulloch Castle in Dingwall, Scotland.

12. Toker / Korro (Olov Johansson)
Korro is a recently composed Scottish inspired by the dancing going on at the Korro festival where we played the hot summer of 2008. Toker has been around for a while. 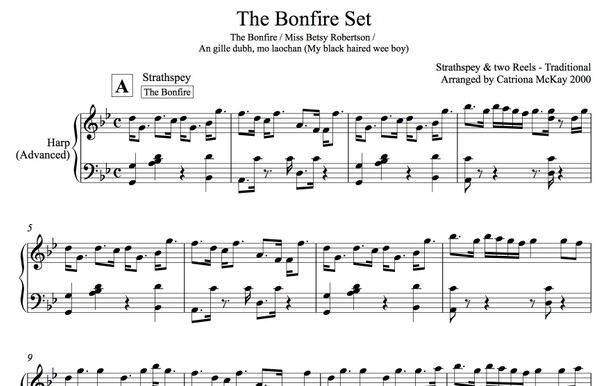 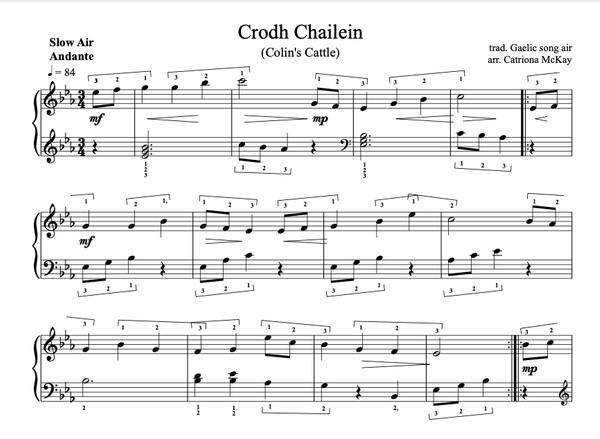 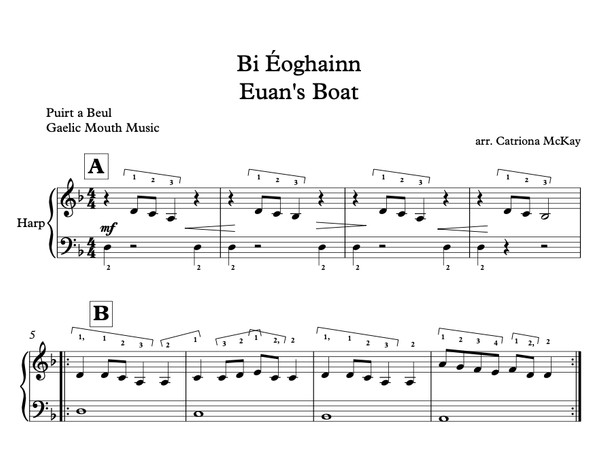 Bi Éoghainn, Euan’s Boat Arr. C McKay
£2
Add to cart
This website uses cookies so that we can provide you with the best user experience. By continuing to use this website you are giving consent to cookies being used.
Got it