Powered by the amazing Buwizz https://buwizz.com/?ref=56

The drivetrain is simple, on the RC it's just drive and steer, no gearbox as the real car is direct drive. 4 L motors for drive and one servo for steering, with a fake V8 in the back, the suspension is where it starts to get interesting, the rear is triplex suspension, unequal length control arms, with integrated sway bar like the real thing, the front is also unequal length suspension, cantalievered with torsion bar and sway bar, the front also raises and lowers a stud and when raising up flaps under the front valance deploy and tuck back up when the car lowers back down.

The interior the seats slide and recline, the steering moves up and down in the centre console there's a lever which is a brand new concept which allows you to switch between opening, the left door, the right door, or both doors at the same time. Now when you're opening those doors which are Synchro dihedral the mirrors will fold in as the doors open out and upwards just like the real car. The front and rear clam shells will open as well and there's a lever in the back which will allow you to open the front, the back or both at the same time.

On the rear clamshell is the rear wing which is on a cam that raises upward and outward and raises out of the back. The roof is removable like the real car, and can store underneath the front clamshell while still leaving enough room for a tote bag. There's also a manual and an RC model the manual model has two gears the dash the first is to open the doors, and the other to steer. The RC model has drive and steering that's hooked up to the fake V8, the doors and the clam shells are also motorized being able to switch between the front and rear or both at the same time. It also has LED lights front and rear. So overall this is a very in-depth detailed and accurate model in sense of functions. 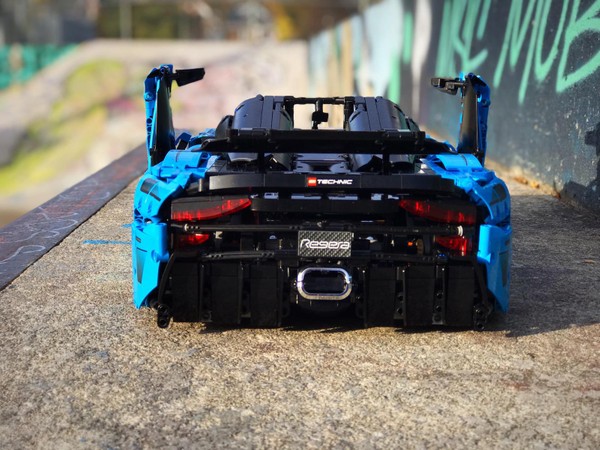 Lego Technic Koenigsegg Regera PDF Manual Instructions
£25
Add to cart
This website uses cookies so that we can provide you with the best user experience. By continuing to use this website you are giving consent to cookies being used.
Got it